How do I unlock a form that another has open?

This behavior will occur if/when two or more people have the same patient, and same visit open concurrently and are attempting to edit that record. This is not an error but rather a feature that was designed to prevent two or more people from editing a patient record at the same time whereby those changes would never be saved and to allow the option to choose which user will have precedence over that record.

Examples of when this will occur:

From any workstation running/using DentalWriter, from the menu bar select Tools, Unlock Forms Locked for editing. 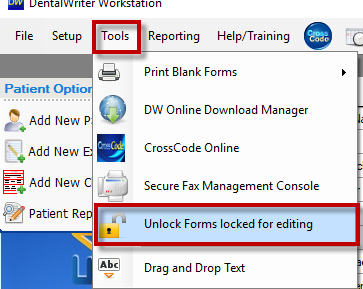 A dialogue will open and provide specific information as to that record currently locked for that form and the workstation that has/or left open.

Approach that user/workstation and make determination if work and or edits have been completed, and if not ask that they do so, and if confirmed completed and may have been left open during a reboot, choose to unlock that record so that editing can be continued. Select “Unlock Selected”